The Strøget is the longest shopping street in Europe and a delightful place to spend a sunny afternoon peering in the show windows, sipping coffee and smiling at the active street scene. 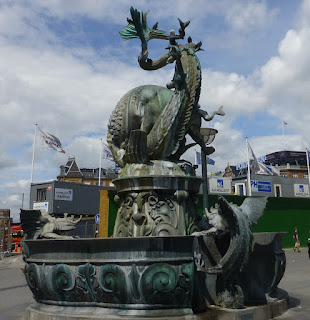 This visit I started from the Radhaus, the city hall, with its strange fountain  depicting a dragon and bull furiously fighting. It stands on the side nearest Tivoli Gardens. A Viking duo eternally blowing their horns are perched far up on a pillar on the other side of the building. In between, smaller dragons guard the entrance. 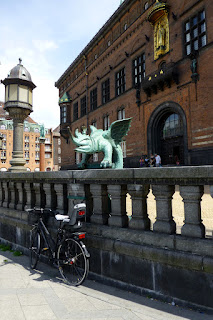 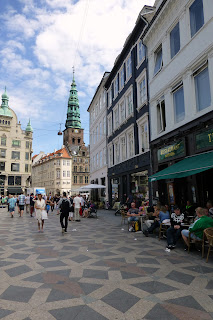 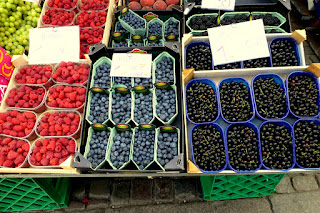 The end of the shopping street where I started my walk is home to the more modest establishments. As I  ambled toward the water the prices increased with every step, finally reaching the rarified Gucci and Chanel showrooms at the harbor end of the street. The entire area was crowded with strollers looking for bargains or luxuries, enjoying the mimes and succumbing to the "Viking" shills standing outside restaurants. More tempting, several stands offered the glories of Denmark's summer bounty. 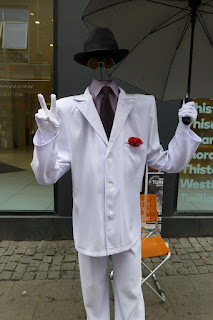 On my way was the Helligaandskirken church, one of the oldest buildings in Copenhagen. Founded in 1296, it underwent many transformations to reach its currently beautiful contours in 1880 when it was done up in Renaissance style. Over one entrance is surely what must be the most lovely lamp standard ever. 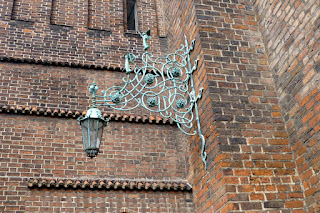 Copenhagen is a city of sculptures and two of the most beautiful are the Caritas Well and my favorite, the Stork Fountain, near my goal: the trio of Royal Copenhagen Porcelain, Georg Jensen – famous for silver; and my idea of home decorator's heaven, Illums Bolighaus, where even the most picky can find what they want. Since it’s by appointment to Her Majesty the Queen of Denmark it’s easy to be sure that it has the best of Scandinavian style. 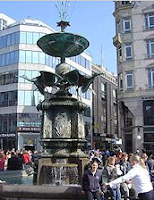 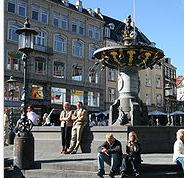 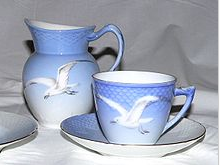 Royal Copenhagen has a design featuring seagulls floating in the blue air. I once had a beautiful and heavy dish of that design – until the day I was reaching for something and knocked it off the shelf. It fell on my head dropping me to the ground. The dish was shattered and my scalp was bleeding as I sat dazed.

As I was browsing around the shop a clerk was behind me fussing with a tall rolling cart filled with porcelain. Before I could get out of the way she gave it a shove. I came within a hairsbreadth of crashing into a display with the force of the impact. Not wishing for a third misadventure any future encounters will be confined to looking in their window. But not to worry: Illums Bolighaus, next door, was having a sale: bed and table linens, cookware, gorgeous glass and all manner of other wonders for the home. So I walked right in. And – yes – I staggered out with treasures to fill up the few empty spaces left in the suitcase. One was a leather shopping bag to hold yet more. 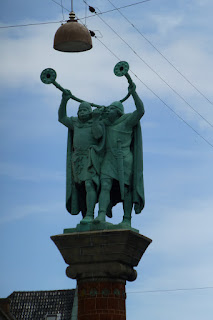 On the way back to our hotel I passed the horn-blowing Vikings again. They hadn't moved. 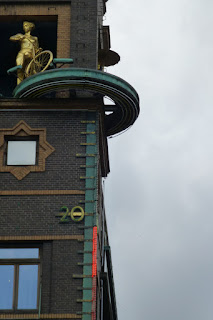 Further on I happened to look up. High on the corner of a building a golden man on a bicycle traveled in an endless circle like his human counterparts on the ground. Another of Copenhagen's delights.
Posted by Judith Works at 2:28 PM

I love this, Judith! My family is from Denmark and I walked along this street with them just a few years ago. :-)