What to do when you’re in the mood for a change of scene but don’t want to fly or spend hours in the car? We decided a ferry ride and 40-mile drive north up the Kitsap Peninsula was far enough. Our first stop was the tiny company town of Port Gamble located on the very tip of the peninsula. The town was founded in 1853 by Pope and Talbot, the lumber company that owned vast swaths of timber in the area. The mill has long since closed but they still own the town of 900 residents. If you’re looking for life in the slow-lane you can lease one of the Victorian-style houses. It’s always fun to spend some time strolling on the main street, each home and business with a historical marker. 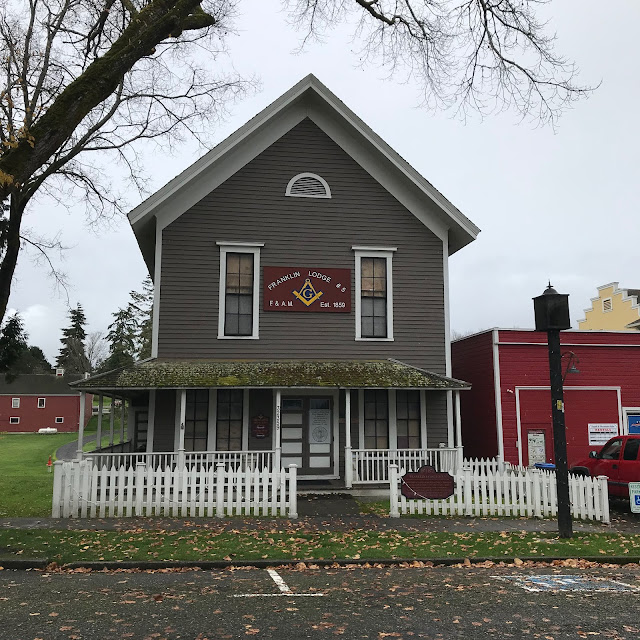 My favorite stop in the “shopping district” is a gorgeous yarn shop called The Artful Ewe (www.TheArtfulEwe.com) run by Heidi Dasher. 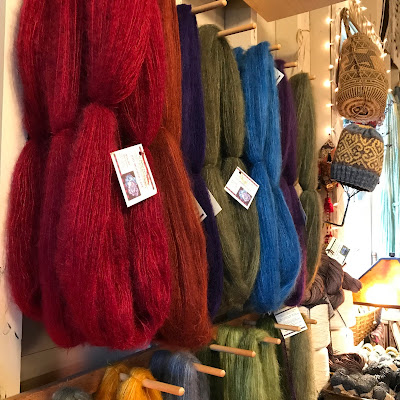 Fortified with coffee and hot chocolate after our strenuous 20-mile trip, we headed to our destination: Port Townsend. Now a quiet town filled with Victorian mansions, art galleries, and wooden boats, and retirees, it has a wild history. Home to several native American tribes, it was “discovered” in 1792 by Captain George Vancouver and founded as a city in 1851. By the 1880s it was the second-busiest seaport on the American West Coast and famed for corruption where custom’s officials were bribed to allow the import of untaxed opium. The main street was lined with hotels that were frequently brothels, men were shanghaied, bars were booming. Those that profited lived in grand houses on the bluff overlooking Sodom and Gomorrah below. Everyone was sure that the town would become the terminus for the trans-continental railroad. (It didn’t). In 1898 a large fort was built at the entrance to Puget Sound. The guns were removed in WWI and shipped to Europe although the fort was used for military training until 1953. The complex has been turned into a year-round location for meetings and festivals, walks on the beach, and opportunities to stay in the old officers’ quarters. 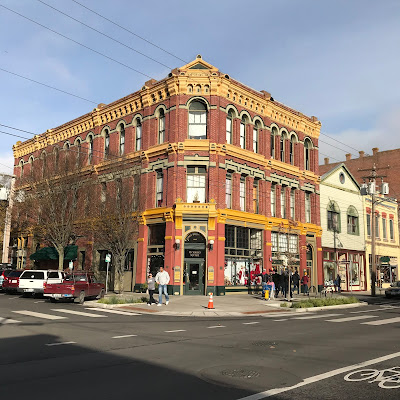 After the War, the town fell into irrelevance only to be revived by hippies arriving from California in the 1970s. Now it’s one of Northwesterners’ favorite weekend locations with the old “hotels” converted to real hotels, and many of the Victorian gingerbread mansions on the bluff revitalized as B&Bs. 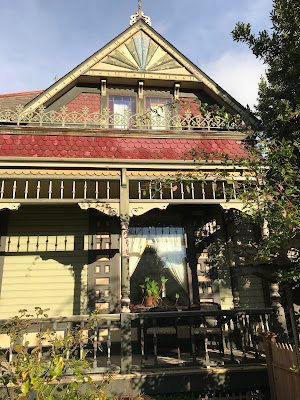 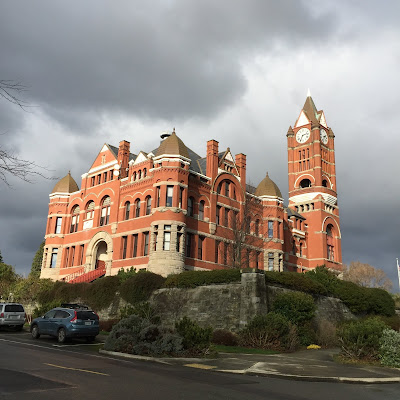 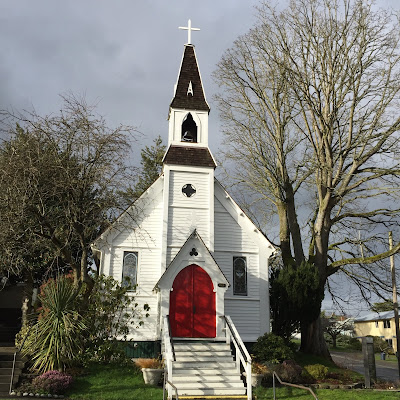 After checking in to our favorite hostelry, The Ravenscroft Inn (www.ravenscroftinn.com) and admiring the deer in their garden, we headed out for serious shopping and eating. 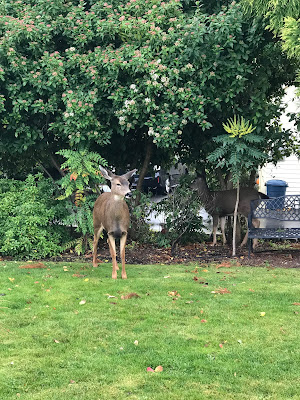 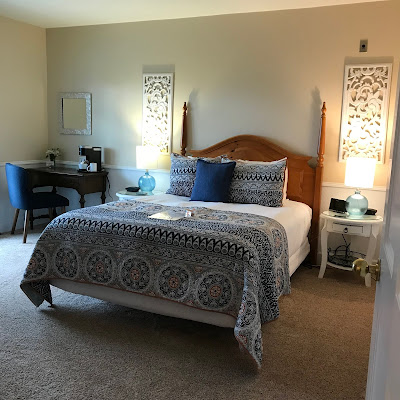 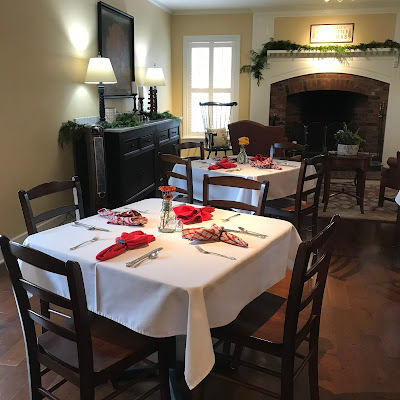 The first stop, as always, were the bookstores. Our two “can’t misses” are Insatiables, old-fashioned with crammed shelves, 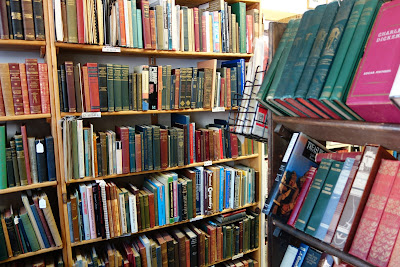 and the larger and airy, William James. Both are filled with bargains and treasures. The main streets are lined with other shops filled with non-literary temptations: wine, cooking, clothing, art and craft galleries, restaurants, cafes, and an Art Deco movie theatre.

A shop called Bubble N Squeak (after the British dessert) lured me to browse antiques from the UK personally selected by the proprietor, Dawn Mohrbacher. Since it was early December, there were boxes of Scottish shortbread, plum puddings, and other traditional fare. (A hangover from Downton Abby someone said.) I didn’t resist the pudding and of course Christmas crackers with their prizes and silly hats. One table was loaded with green-glazed salad/dessert plates dated from about 1870 that were just the thing to highlight the pudding. Another shopping bag filled. 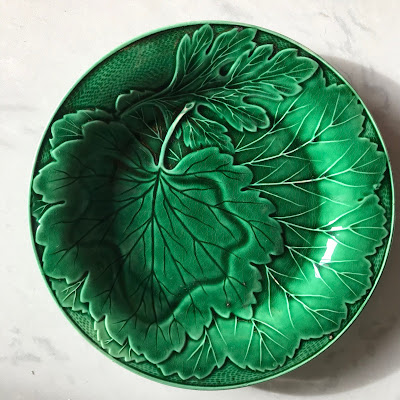 We enjoyed lunch at Taps where patrons are served in the old Fort Worden guard house. Fortunately, a fireplace and fully-stocked bar are part of the restaurant – amenities probably not available for earlier occupants.  The razor clam and andouille chowder and Dungeness crab cakes were worth a stay in jail. We returned to the fort area for dinner at Reveille (is where breakfast is served to groups). Sorry to say it was lacking in ambience and very expensive. 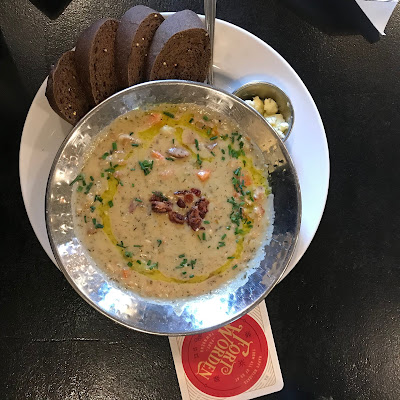 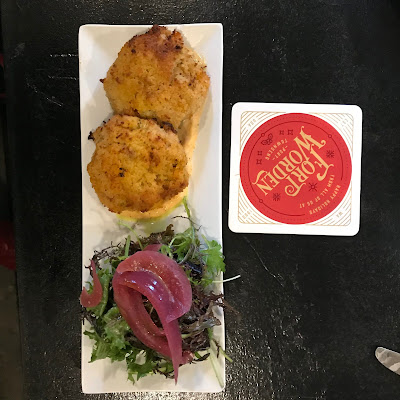 The next day began with a short walk to the local farmer’s market. It was still going strong in December with a large selection of locally-grown vegetables and all the other items usually associated with a market; in this case, including the proverbial aging hippies, one of whom was trying to (unsuccessfully) to jump rope in her rubber boots. Nearby is the marvelous Pane d’Amore bakery where we succumbed to brownies and other treats. 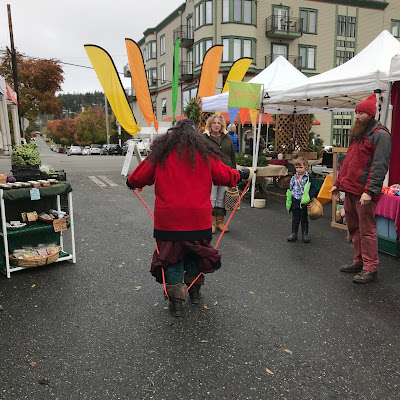 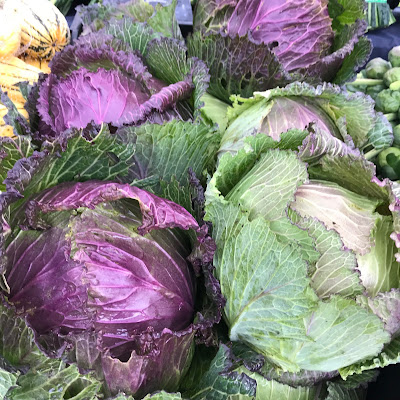 We parked our vegetables (carrots, beets, and rucola) in the car trunk and headed back to town to browse galleries and antique shops (some more formal than others). 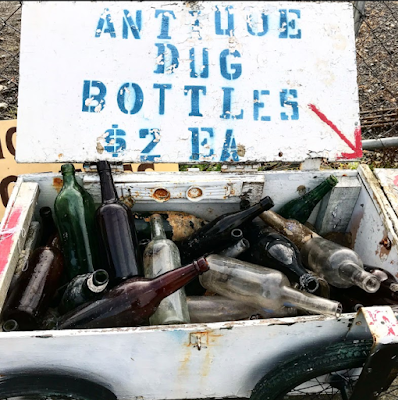 Later, we bought a bottle of Montepulciano d’Abruzzo and headed to our room to prop up our tired feet in front of the fireplace with a glass and a book – a perfect afternoon. 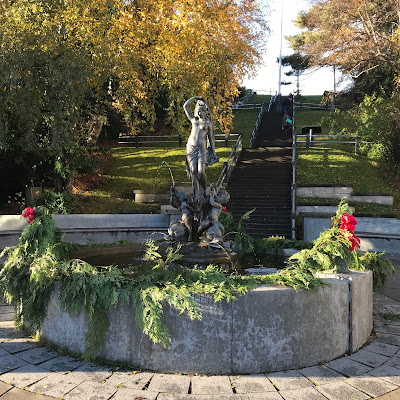 Dinner was at the always excellent Fountain Café. Fortunately, they had paella on the menu. 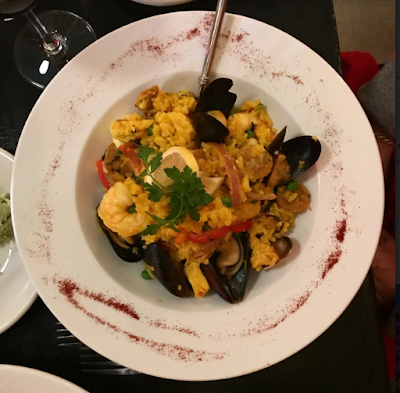 My idea of food for the gods. 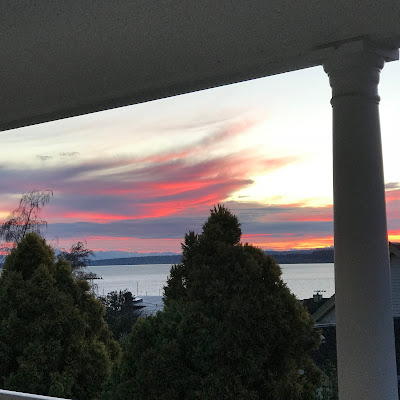 We woke to a glorious sunrise. It was time to head home with our vegetables, shopping bags, and relaxed attitudes. The ferry soon arrived and we slid past lazy cormorants resting on the Kingston dock pilings, no doubt waiting for a meal to swim by as we tried to decide how soon we’d return to Port Townsend. 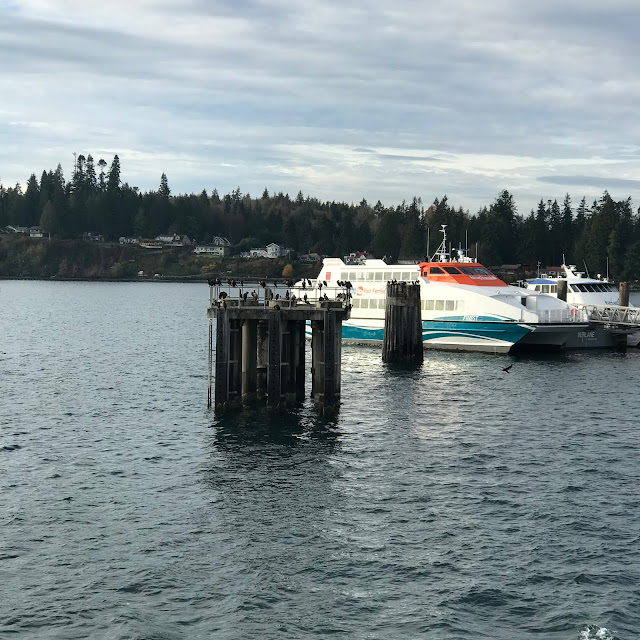 A tantalizing article to lure me back on the ferry for another visit. And those plates are gorgeous!