In desperate need of sun, we flew to southern California for some warmth and a change of scenery – no fir trees, no salt water, no gloom - for a week. There are nine communities clumped together in the Coachella Valley but we stuck to two: Palm Springs and Rancho Mirage for a dose of culture when we weren’t catching rays near the pool at our rented condo where hummingbirds investigated my red shoes. 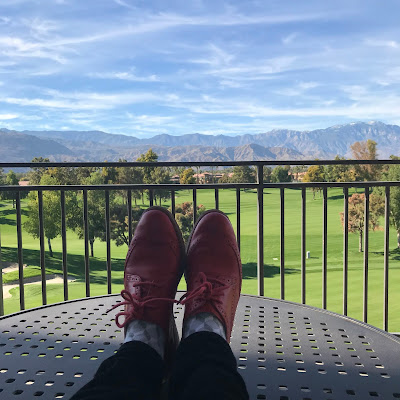 The area was settled by the Cahuilla peoples thousands of years ago, calling what we know as Palm Springs: Se-Khi” or boiling waters. The local band take their name, Agua Caliente, from the hot springs and are “fortunate” that in 1876 they were granted 6,700 acres of land in what would become the city and are thus wealthy compared to the many unfortunate tribes that lost virtually everything.
The designation of the location as Palm Springs may come from early Spanish explorers who referred to the area as The Palm of God’s Hand, but as early as 1853 the word referred to the native California fan palm. Europeans showed up more permanently in 1862 when a stagecoach station was established and a wealthy attorney from San Francisco, John McCallum, brought his tubercular son to the area in hopes of curing him in the dry climate. 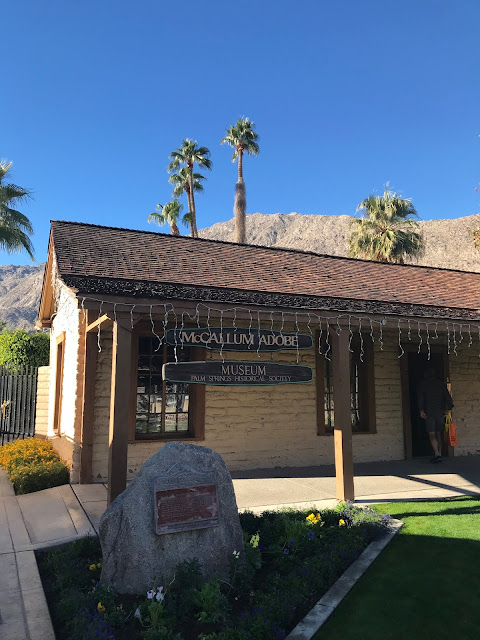 McCallum’s early experiment in agriculture came to an abrupt end when the area suffered an unprecedented 17 days of pouring rain, followed by an 11-year drought, ruining crops and the irrigation canals. Undaunted, other entrepreneurs established hotels touting the dry climate as ideal for those with lung problems. The 1920s brought movie stars like Valentino and Errol Flynn who could have fun (i.e. sex, golf and tennis) away from the prying eyes of gossip columnists who didn’t have money enough to travel the 110 miles from L.A.

By the mid-1940s a new architectural style perfectly attuned to the landscape, was brought to the desert by the architect Richard Neutra, to house the rich and famous. The most famous of these houses is the Kaufmann house, with its use of modern materials and extensive glass windows was the model for many other homes, some of which are open during the twice-annual Modernist Week. 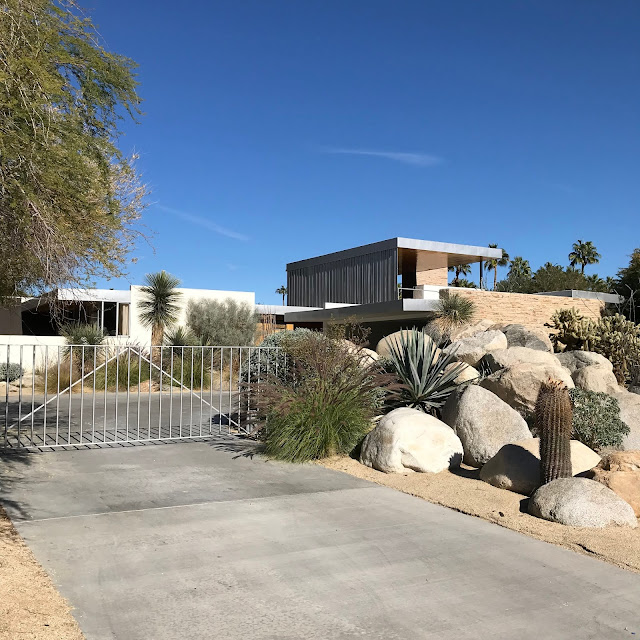 The 1950s were the beginning of the louche Rat Pack era with Sinatra, Martin, Davis, Elvis and others living high (actually low). But it was also the time when miles of attached housing and mobile home enclaves attracted heat-seeking retires who thronged the golf courses. That the area is a continuing magnet is evident in the number of hospitals, urgent care centers, and consignment shops lining the major roads. We passed one major intersection with two care centers kitty-corner from each other just like Starbucks. Despite the warm sunshine, I felt a chill.

The town sunk during the recession of 1973-75 and again in the 2008. With the latest economic revival, downtown Palm Springs is revitalizing and showcasing its modernist architecture where the angular style is a perfect complement to the stark desert hills surrounding the town and to the landscaping surrounding the buildings – cactus, agave, sparse-leafed trees, and purple bougainvillea. Some of the buildings are painted eye-popping colors, like the Saguaro Hotel. 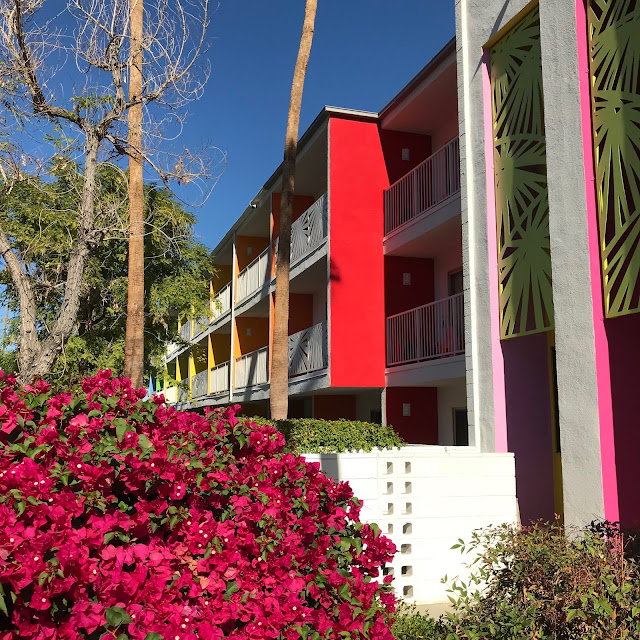 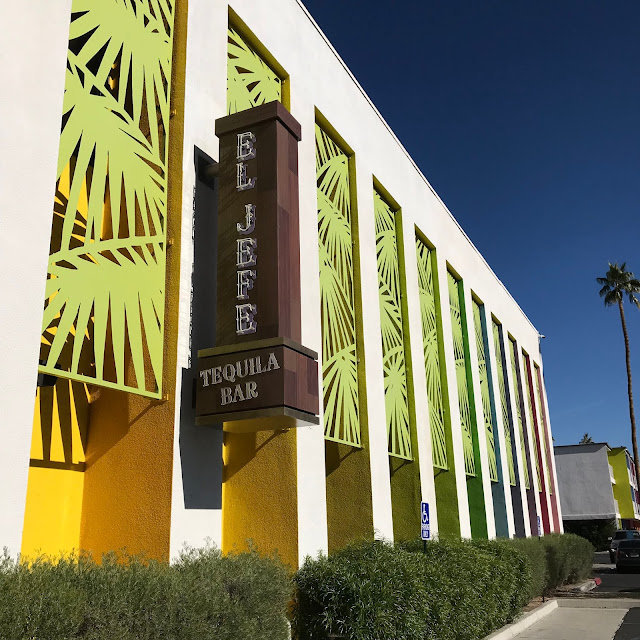 And some of the shopping opportunities are equally colorful.

We took a walking tour around the downtown where it is evident that restoration is underway with sculptures, and new buildings in the modernist style – such a far cry from the several old buildings that form the nucleus of the original settlement like McCallum’s adobe. 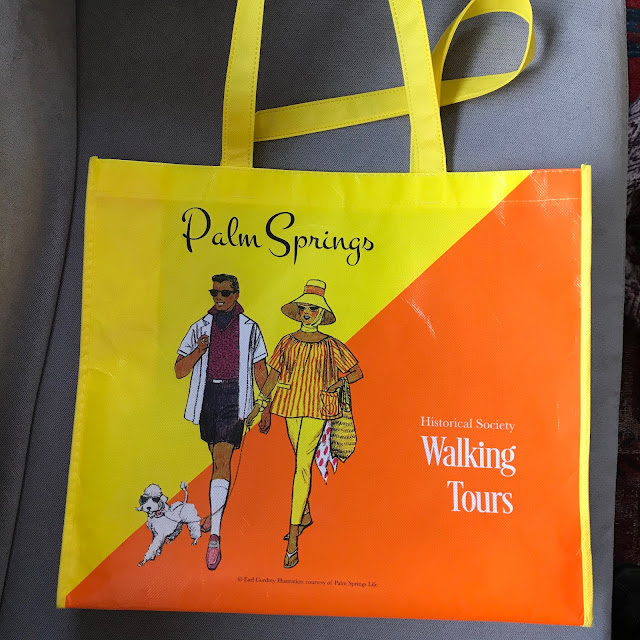 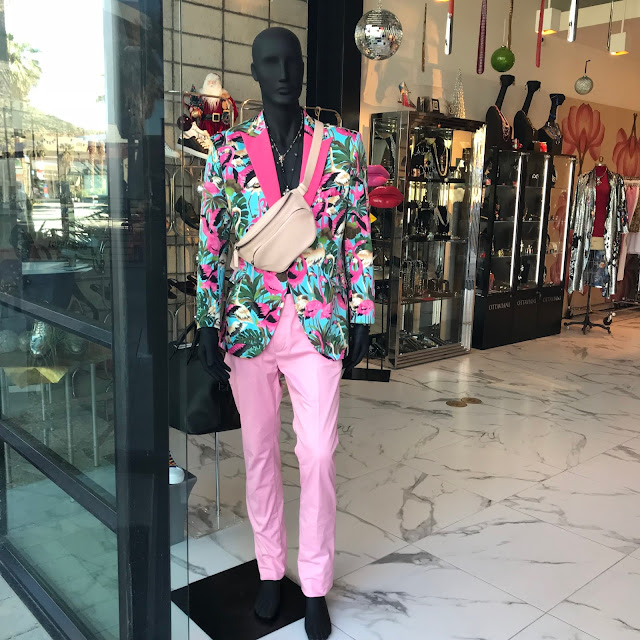 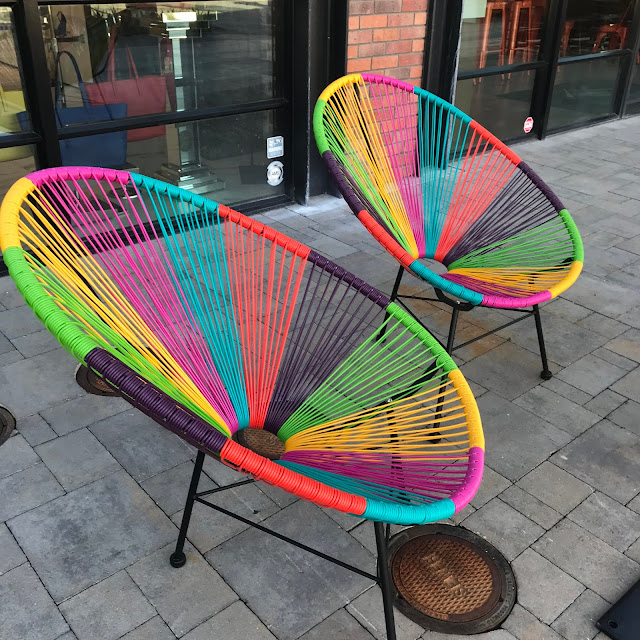 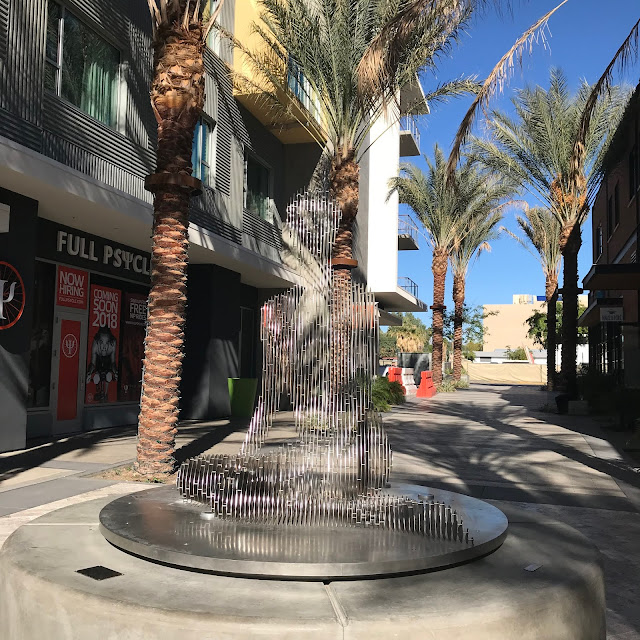 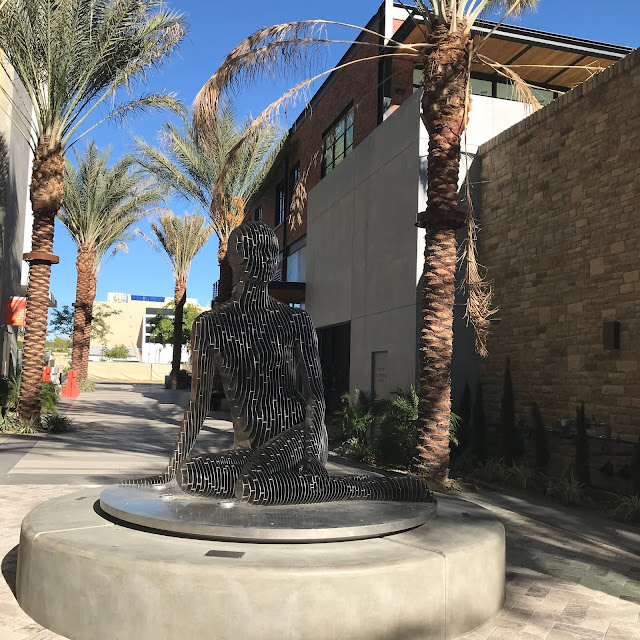 For a change of scene, we spent a day in nearby Rancho Mirage, famous for the Annenberg estate nicely-named Sunnylands. The 200-acre grounds include a private golf course, 11 lakes, swimming pool, and extensive gardens filled with desert plants. We entered the complex through the impressive and new Welcome Center. 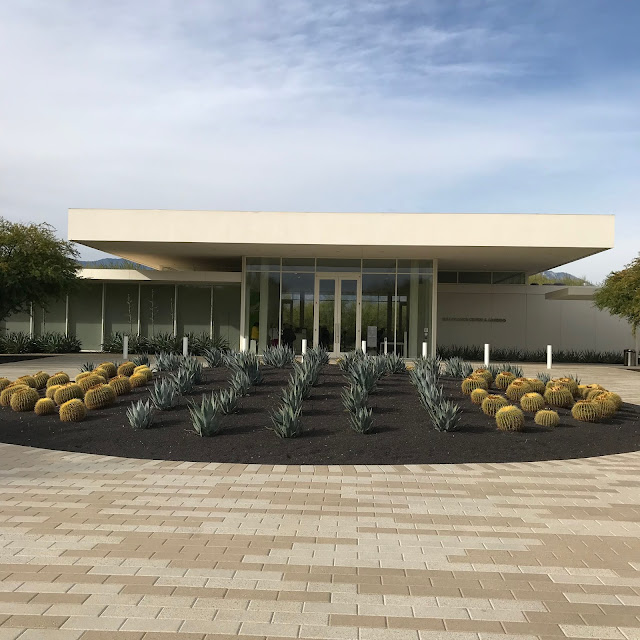 Annenberg was an enormously wealthy philanthropist who was Ronald Reagan’s Ambassador to the U.K. He knew every politician from the 1930s on and the room containing his memorabilia is worth a long look. He envisioned the 25,000 square-foot house would be used as a place where solution-driven meetings could take place, and to that end the architect A. Quincy Jones (not the musician) designed a mid-Century modern mansion with its stark lines and egg-crate overhang greeting us at the home's entrance. 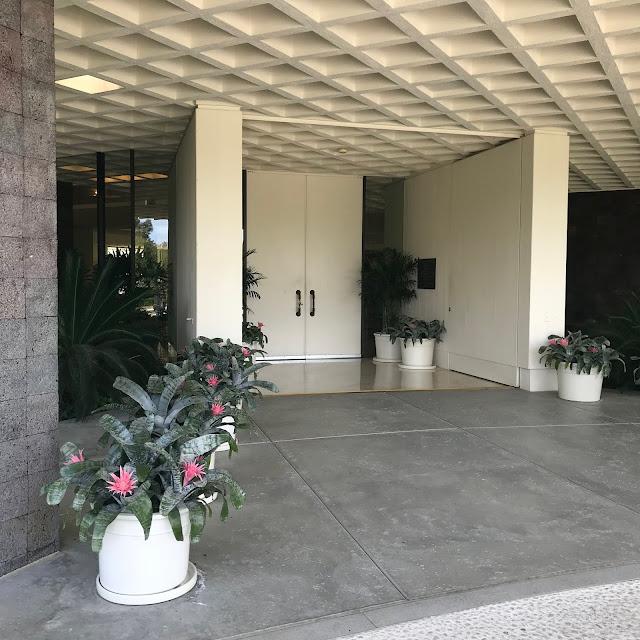 To my eye the interior was a strange jumble, especially the gigantic living room with a continuation of the egg-crate ceiling, clumps of furniture in the Hollywood Regency style, a walk-in fireplace, Rodin sculpture, and Chinese antiquities surrounding a central pool like a Roman villa of old. The most startling aspect of the room is the collection of paintings, Impressionist and Post-Impressionists in their gold carved frames. I did a double-take because I was sure I’d seen many of them before. It turned out I had – all the originals were donated to the Metropolitan Museum and these were digital reproductions which lent a surreal air because some of the paper on which they were printed was slightly warped - enough to catch the light.

We passed outside to view the golf course and swimming pool thinking of all the famous people who visited stayed in the guest house – a series of five color-coordinated rooms, each with a list of those who had rested there: Queen Elizabeth, Sandra Day O-Connor, eight presidents, and the current president of China. 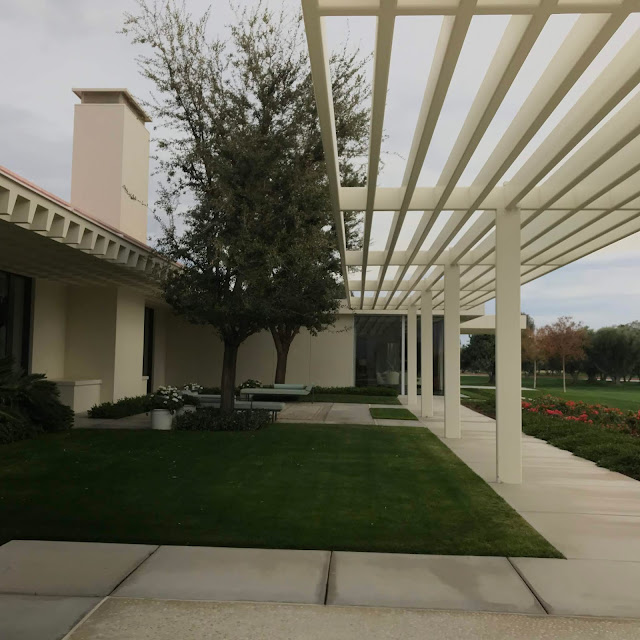 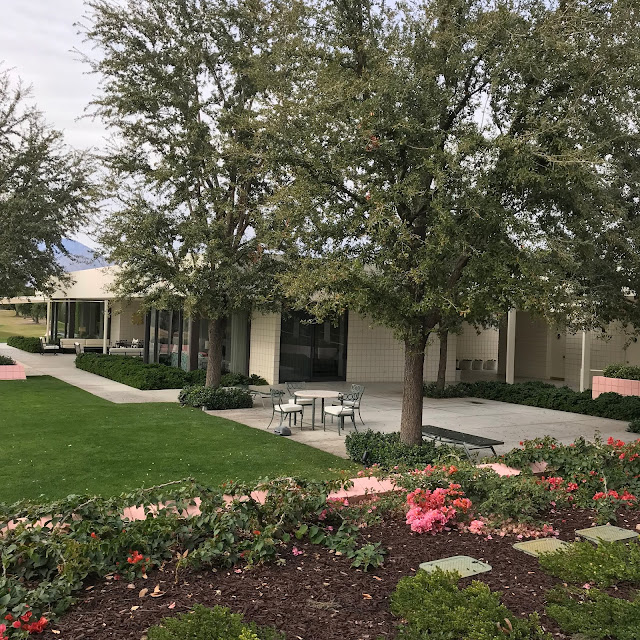 A Trust was set up to preserve the estate and to continue fostering positive international relations after the Annenbergs died. Groups of up to twenty now come for meetings (and golf) while thousands of casual visitors enjoy a tour of the home, gardens, and Welcome Center.

After the tour we were ferried back to the Center in oversized golf-carts. We enjoyed an outdoor lunch and strolled the gardens, watching a yoga class on the Great Lawn before viewing a photographic exhibition of the many birds that make their home on the estate. 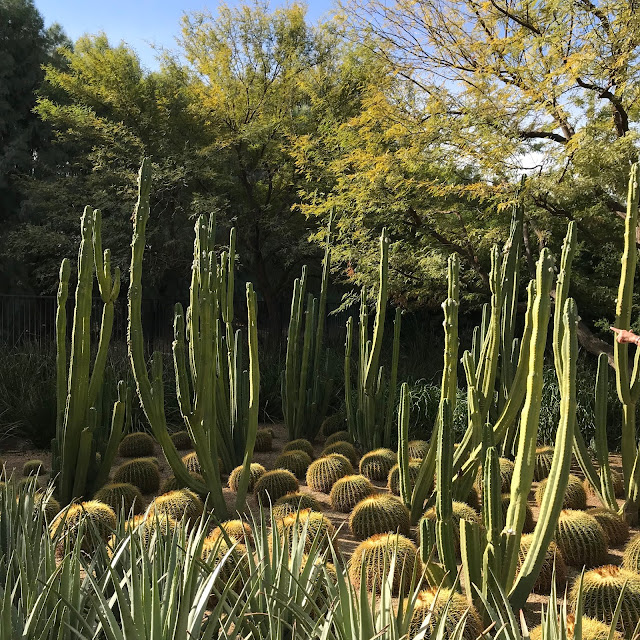 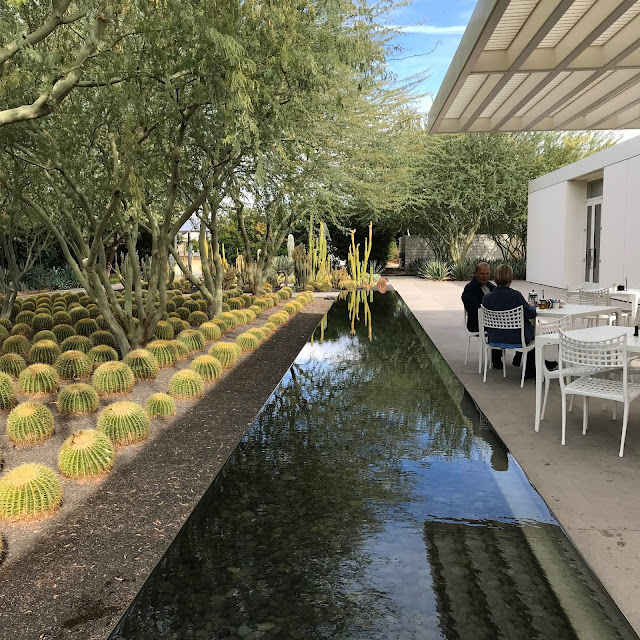 Enough culture! We retreated to our condo on one of the more than a hundred golf courses on the area to enjoy the late afternoon lengthening the shadows of the palm trees on the course. We lounged on the balcony with our chilled pinot grigio watching golfers approach a rather menacing sand trap. Several, stuck in the hole, raised their heads to look around before furtively picking up their ball and casually placing it on the putting green not far from the flag. I wondered if any of the famous people who enjoyed a round at the Annenberg estate dared do the same. 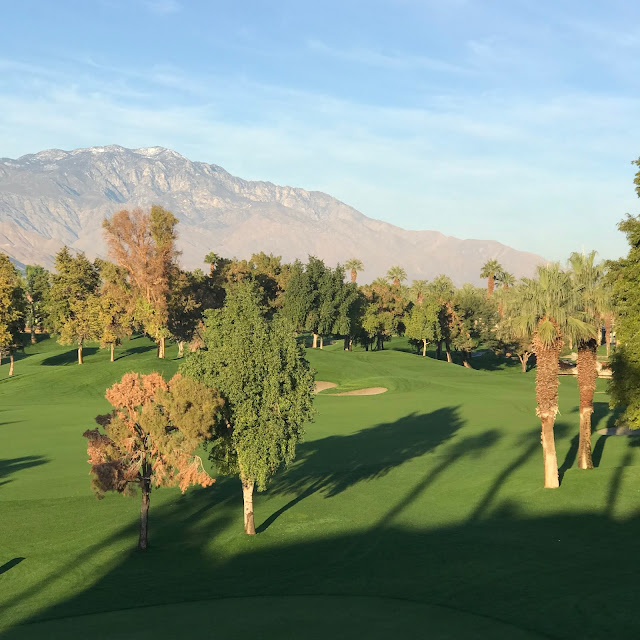